About Tastykake, History and Headquarters Information

Tastykake is a line of snack foods which are manufactured by Tasty Baking Company. Its headquarter is in the Philadelphia Naval Business Center which is in Philadelphia, Pennsylvania. Its parent organization is Flowers Food.
The Tasty Baking Company was founded in 1914 and has over 1000 employees. It is the one which changed the world of snack cakes, when the founder, Philip J. Baur, Boston, and Salesman Herbert T. Morris began the operation of Tastykake in Philadelphia. It was the wife of Herbert T. Morris who came up with the name Tastykake after pinching the baked cake and finding it to be tasty.
Its subsidiaries are TBC Financial services inc, Tasty Baking Oxford, Inc, Tastykake Investments Co. It serves in the Northeastern United States of America and Mid Atlantic. Even though it started out as a Philadelphia operation, they have expanded to include their distribution in the entire East coast and most of the places which are below the Mason Dixon Line. 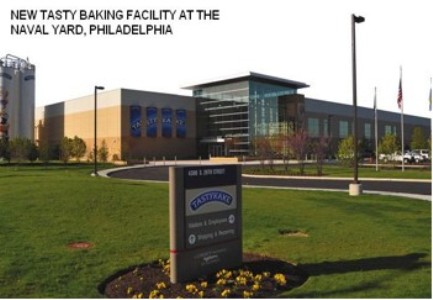