Sonic is the operator of an American drive-in fast-food restaurant chain based in Oklahoma City, Oklahoma, that is owned by Inspire Brands, the parent company of Arby's and Buffalo Wild Wings. Prior to its acquisition by Inspire Brands, its stock traded on NASDAQ with the symbol SONC

Sonic founder Troy N. Smith Sr. opened a fast food restaurant, Troy's Pan Full of Chicken, on the edge of town. He then went in with a business partner to purchase a five-acre parcel of land that had a log house and a walk-up root beer stand, already named the Top Hat. The two men continued with the operation of the root beer stand and converted the log house into a steak restaurant. After realizing that the stand was averaging $700 a week in the sale of root beer, hamburgers, and hot dogs, Smith decided to focus on the more-profitable root beer stand. He also bought out his business partner. Originally, Top Hat customers would park their automobiles anywhere on the gravel parking lot and walk up to place their orders. However, Smith saw a drive-in that used speakers for ordering. On September 25, 2018, Atlanta-based Inspire Brands, owner of Arby's and Buffalo Wild Wings, announced that it was buying Sonic Drive-In for $2.3 billion. The acquisition was completed on December 7, 2018.

Sonic's menu consists of hamburgers and French fries, as well as onion rings, corn dogs, chili dogs and breakfast toaster sandwiches. Drink options include soft drinks, slushes, and milkshakes. Customers can combine various drinks and flavors to create thousands of possible drink combinations. Ice cream desserts include sundaes and floats. At a standard Sonic Drive-In, a customer drives into a covered drive-in stall, orders through an intercom speaker system, and has the food delivered by a carhop. Most drive-ins also have patio seating, and many have drive-thru lanes. 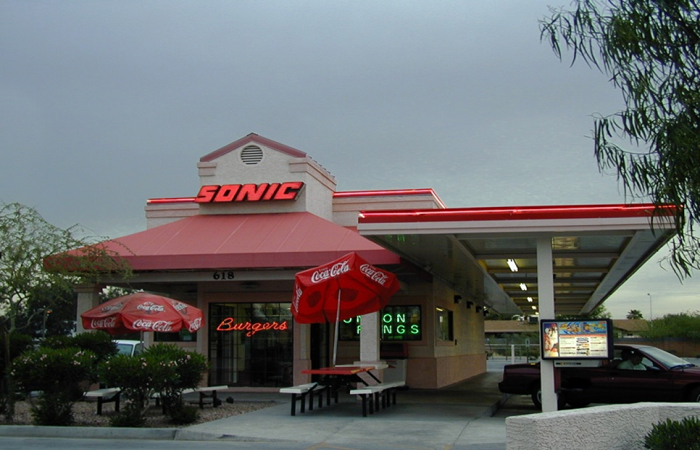 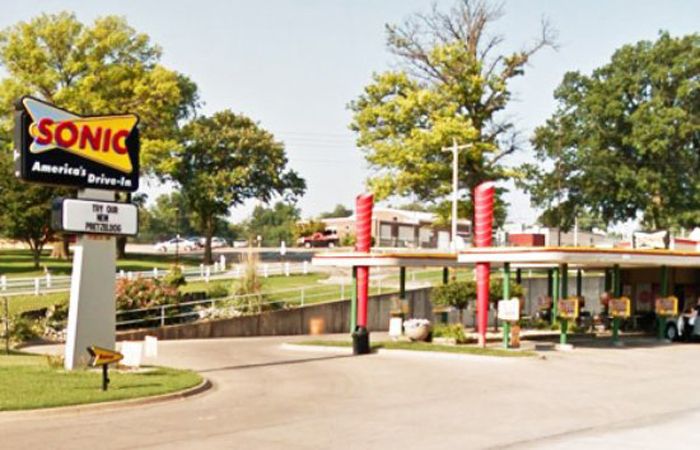