With over thirty stores across Brooklyn, Manchester, and Westchester, Gristedes Supermarket has made its place as one of the New York’s popular landmarks over the 120 years since its establishment in 1888.

This chain of supermarkets started out with just one small retail store opened by two teenagers- Diedrich and Charles Gristede. But over the years with their hard work and due to the range of products that they were offering at such good prices, the store flourished and expanded into multiples in a matter of a few years. In 1986, the Red Apple Group acquired the stores and have managed it ever since.

Gristedes Supermarket has, thus, made its name in the town for selling the best quality products ranging from fresh meat, dairy products, gourmet foods, baked goods, and a variety of non-food products to their customers at the best prices. The associates, managers, and employees are all equally proud of this well-known ‘landmark’ in New York. 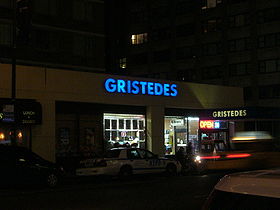