Based in Dallas, Texas USA, Dickeys Barbecue Pit was incorporated in 1941 by Travis Dickey in Dallas, Texas. The restaurant introduced franchising in 1994. By 2017, its franchise grew leaps and bounds and spread over more than 560 restaurant locations in 43 states. In addition to this, it went international and opened its first location in Abu Dhabi, the United Arab Emirates in 2018. This chain was featured on Technomic as the “Fastest-growing restaurant chain in the country” in 2012. The same year, it also featured on QSR Magazine’s list of "Best Franchise Deals.

Dickeys barbecue pit is the world’s largest and fastest family-owned American barbecue restaurant chain. It is a subsidiary of Dickey's Capital Group. The restaurant is popular among the people in the USA as the largest barbecue franchise. This chain of restaurants offers beef brisket, pulled pork, pork ribs, polish sausage, spicy cheddar sausage, hotlink, and chicken. 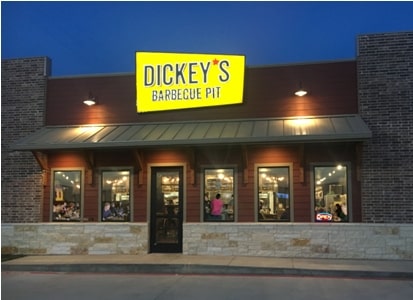